Menopause, also known as the climacteric, is the time in most women’s lives when menstrual periods stop permanently, and they are no longer able to bear children. Menopause typically occurs between 49 and 52 years of age. Medical professionals often define menopause as having occurred when a woman has not had any vaginal bleeding for a year. It may also be defined by a decrease in hormone production by the ovaries. In those who have had surgery to remove their uterus but still have ovaries, menopause may be viewed to have occurred at the time of the surgery or when their hormone levels fell. Following the removal of the uterus, symptoms typically occur earlier, at an average of 45 years of age. 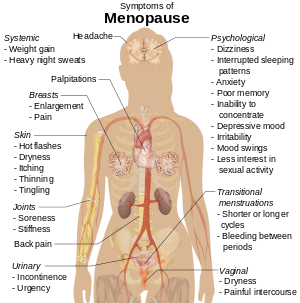 During early menopause transition, the menstrual cycles remain regular but the interval between cycles begins to lengthen. Hormone levels begin to fluctuate. Ovulation may not occur with each cycle.

The date of the final menstrual period is usually taken as the point when menopause has occurred. During the menopausal transition and after menopause, women can experience a wide range of symptoms.

During the transition to menopause, menstrual patterns can show shorter cycling (by 2–7 days); longer cycles remain possible. There may be irregular bleeding (lighter, heavier, spotting). Dysfunctional uterine bleeding is often experienced by women approaching menopause due to the hormonal changes that accompany the menopause transition. Spotting or bleeding may simply be related to vaginal atrophy, a benign sore (polyp or lesion), or may be a functional endometrial response. The European Menopause and Andropause Society has released guidelines for assessment of the endometrium, which is usually the main source of spotting or bleeding.

In post-menopausal women, however, any genital bleeding is an alarming symptom that requires an appropriate study to rule out the possibility of malignant diseases.

Symptoms that may appear during menopause and continue through postmenopause include:

Menopause can be induced or occur naturally. Induced menopause occurs as a result of medical treatment such as chemotherapy, radiotherapy, oophorectomy, or complications of tubal ligation, hysterectomy, unilateral salpingo-oophorectomy or leuprorelin usage.

Menopause typically occurs between 49 and 52 years of age. In India and the Philippines, the median age of natural menopause is considerably earlier, at 44 years.

In rare cases, a woman’s ovaries stop working at a very early age, ranging anywhere from the age of puberty to age 40. This is known as premature ovarian failure and affects 1 to 2% of women by age 40.

Women who have undergone hysterectomy with ovary conservation go through menopause on average 3.7 years earlier than the expected age. Other factors that can promote an earlier onset of menopause (usually 1 to 3 years early) are smoking cigarettes or being extremely thin.

Premature ovarian failure (POF) is the cessation of the ovarian function before the age of 40 years. It is diagnosed or confirmed by high blood levels of follicle stimulating hormone (FSH) and luteinizing hormone (LH) on at least three occasions at least four weeks apart.

An early menopause can be related to cigarette smoking, higher body mass index, racial and ethnic factors, illnesses, and the surgical removal of the ovaries, with or without the removal of the uterus.

Rates of premature menopause have been found to be significantly higher in fraternal and identical twins; approximately 5% of twins reach menopause before the age of 40. The reasons for this are not completely understood. Transplants of ovarian tissue between identical twins have been successful in restoring fertility.

Menopause can be surgically induced by bilateral oophorectomy (removal of ovaries), which is often, but not always, done in conjunction with removal of the Fallopian tubes (salpingo-oophorectomy) and uterus (hysterectomy). Cessation of menses as a result of removal of the ovaries is called “surgical menopause”. The sudden and complete drop in hormone levels usually produces extreme withdrawal symptoms such as hot flashes, etc.

Removal of the uterus without removal of the ovaries does not directly cause menopause, although pelvic surgery of this type can often precipitate a somewhat earlier menopause, perhaps because of a compromised blood supply to the ovaries.